The electron-ionic model of ball lightning was represented by Sergey G. Fedosin [1], a physicist and the philosopher from Perm, Russia, and Sergey A. Kim, from Perm state university, in a number of works. [1] [2]

In this model, ball lightning is a cluster of the very hot ionized air with the positive charge in general, whose shell consists of the rapidly revolving electrons with the total current up to 1,4•105 A. Ball lightning as whole is supported by the balance of the electromagnetic forces, which act between the charges. Positive ions inside the lightning are distributed freely as a result of the spherical symmetry, and attract to themselves the electrons of shell, retaining them from the dispersion. According to the model the ball lightning is formed from two close branches of a linear lightning at the time of termination of current in the main channel with the subsequent closure of branches in a current ring. 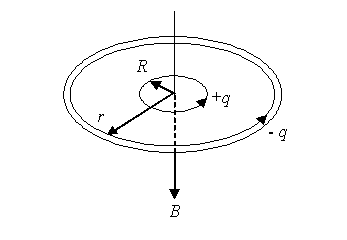 Equatorial cross-section model of ball lightning as a distinct ring on the current sheet spheroidal shape. R - radius of rotation of ions in the equilibrium shell around the magnetic field with induction B, r - radius of the outer electron shell.

Theory predicts from the first principles the maximum diameter of ball lightning 34 cm. [2] With the larger size the summary charge of lightning, which has positive sign, grows to the value of 10 –5 C and appears the electrical breakdown of air near the lightning. The energy of the lightning in this case reaches 10.6 kJ, the current in the shell 1.4∙10 5 A, the internal magnetic field of 0.5 Tesla. Because of its charge ball lightning does not simply float under the action of the force of Archimedes, but it is retained by electric force from clouds and the induced charge on the Earth. The formula for the maximum radius of ball lightning has the form:

Where  m, q  are the electron mass and charge, E0=30 kV/cm  is the greatest possible electric field of ball lightning, leading to the electric air discharge, c - the speed of light. In moist air maximum field strength becomes smaller, which allows ball lightning have the sizes more than 34 cm.

Bead lightning is also explained on the basis of electron-ionic model of ball lightning. [4]